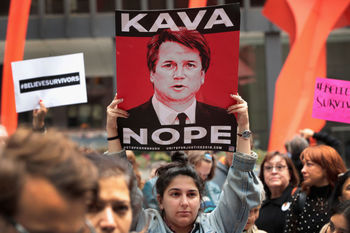 SEA supports survivors of sexual harassment and sexual abuse first by believing the trauma these victims have experienced, and second, by understanding and asserting the victims are not to be blamed for the harassment or abuse they have endured. SEA stands with Christine Blasey Ford and the other survivors as they put voice to their stories and we stand with them as they now live with those stories that have been revealed.

Now that the Democrats have retaken control of the House of Representatives, Democrats have the power to impeach Brett Kavanaugh, who repeatedly lied under oath and demonstrated that he is unfit for the Supreme Court, as declared by over 2400 law professors.

We call on the NEA and WEA to join us in urging this new Democratic majority to take action against the unfit Justice that now sits on the Supreme Court and to stand not only with Christine Blasey Ford but with all survivors of sexual harassment and sexual abuse.

– The Seattle Education Association
Posted in: Blog Entries
Back to Blog